About The Book & Author


THEY CALLED US CURRAHEES is the story of the 3-506 Legacy during the Vietnam war.  This book is dedicated to the families and loved ones of all the men who served with the "Currahees" of the 3rd Battalion, 506th (Airborne) Infantry, Task Force 3-506th, and the 4th Infantry Division Cambodia Operation Task Force veterans (1970)—and to the families whose lives were forever changed by the loss of their loved ones during the Vietnam War.

This book begins with my autobiography, tracing the path that brought me ultimately to the 101st Airborne and the Vietnam War.  As an infantryman, as well as the battalion PIO, I have been able to combine my experiences in war with many personal photographs in tracing my tour of duty with the 3rd Battalion, 506th Infantry (Airborne), 101st Airborne Division in South Vietnam from October 1967 to September 1968.

The remainder of the book continues the proud traditions of the Currahees as new recruits and replacement troops revolved through the ranks for the remainder of 1968 through May 1971, when the 3-506 finally left South Vietnam.  Beyond my tour as an original member of the 3-506, I had to rely on my fellow Currahees who served after me in order to reconstruct the facts of battles, as well as the names of officers and the names of those who died.   Without their assistance, the remainder of this book beyond my own tour would not be as factual and complete.

“They Called Us Currahees” is not a stand-alone publication, yet serves as an invaluable compilation of historical information concerning the participation of the 101st Airborne Infantry Division in the Vietnam War.  I have authored other companion books, which explain in greater detail the many incidents, battles, and missions involving the 3-506th Infantry “Currahees”.

“The Stand Alone Battalion”, published in 2002 is a pictorial chronology of the 3-506 participation in the Vietnam War from 1967-1971.  “My Gift To You”, published in 2006, contains the stories of those Currahees who died in Vietnam while serving with the 3-506 101st Airborne Division.  The book, “Twelve Days In May”, released in 2010, explains in great detail the involvement of the 3-506, as well as the 4th Infantry Division Infantry Battalions and support units, in the northern thrust into Cambodia (Operation Binh Tay I) while OPCON to the 4th Infantry Division in May 1970.

These companion books, together with “They Called Us Currahees” are found here in this Giftshop/PX, and will give a comprehensive representation of combat in South Vietnam from the personal perspective of those who served with the 3-506 Infantry, fought the battles and suffered the many scars of war.

PFC Jerald W. (Jerry) Berry was originally assigned as a rifleman in Company A, 3rd Battalion, 506th Airborne Infantry, 101st Airborne Division and became the Public Information Officer (PIO) for the Battalion shortly after its arrival in South Vietnam in October of 1967. His task as the Battalion Combat Photographer and Reporter was to chronicle the Battalion’s tour of duty in South Vietnam through pictures and newspaper articles for the period of October 1967 to September 1968.

Berry was wounded at the beginning of the infamous Communist Tet Offensive of 1968 and received the Purple Heart Medal for his wounds in action. A wealth of photographs, newspaper stories, field interview notes, and personal diary entries came home with him from Vietnam and ultimately formed the basis for this book.

After completing his tour of duty in Vietnam, Berry returned home to continue his thirty-plus-year career with the Federal Government--the U.S. Forest Service & U.S. Army Corps of Engineers--retiring as a Staff Wildlife Biologist in 1997.  He is the author of numerous articles on the 3-506, as well as the books, "Psychological Warfare Leaflets of the Vietnam War”, "My Gift To You", "Twelve Days in May", and "In The Company of Heroes". He currently resides in Libby, Montana with his wife, Donna, and continues his dedication to the legacy of the 3-506 by maintaining two active Internet websites: The Stand Alone Battalion, and The Stand Alone Battalion 3-506 & TF 3-506 FaceBook Group Site: for his fellow Currahees and the members of Task Force 3-506th Units.

THEY CALLED US CURRAHEES
by Jerald W. Berry 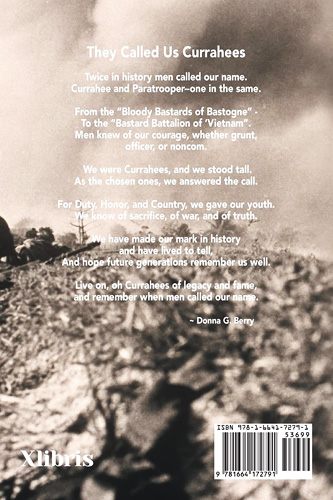